How to Talk to Your Kids About the Election 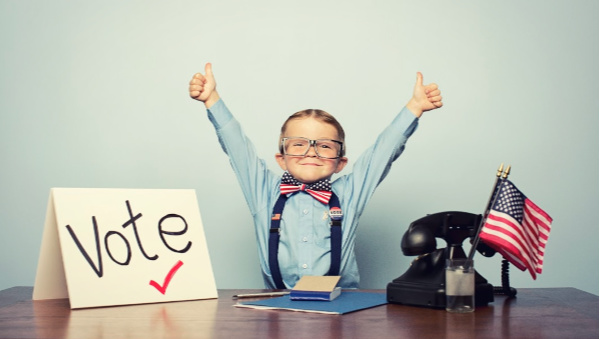 Honestly, I really wish I could say, “Just don’t!” I wish I could just tell my kids not to worry about politics until they’re old enough to vote and whistle a happy tune and be on our way. But the fact is that kids will hear all kinds of things from all kinds of people during this election year and as a Christian parent, I want to make sure I help them filter everything they are hearing. My job is not only to teach them Bible stories and theology but to teach them how to look at everything, politics included, through the lens of a Christian worldview.

I think we can all agree that 2016 was a brutal year for America. No matter which side you were on—or even if you were in the middle, things got ugly on both sides of the aisle. I have never seen America more divided in my lifetime. And then came 2020. I never imagined things could get worse but this year has been a doozy! But the story isn't over yet.

No matter what everyone else out there is saying, we can control what is said in our own homes. We can set the tone for how our kids think and talk about politics in our society. We can help them shine the light of Christ into what has been a very dark yeart.

When your kids come home repeating what they heard on the playground about which presidential candidate their friend's parents are voting for and all the reasons they think the other one is a horrible choice, what will you say? Here are a few ideas on how to guide a faith-informed, hope-filled conversation about the election this year.

How To Talk To Your Kids About the Election

Always Speak with Respect and Grace

We all have our opinions, some of us very strong ones. We have to remember that our kids will model not only what we say but how we say it. I have heard my 5-year-old parrot back exactly what I said about a particular candidate in exactly the same tone of voice I used . . . and I was mortified. I not only had no idea he was listening, but I also had no idea that I sounded that way. As the song goes, “Be careful, little mouth, what you say.” As believers, no matter what you think about a particular candidate’s platform or their character, there is no reason to speak of them with any less respect than you would any other child of God. The world speaks in snide comments, sound bites, and gossip. A follower of Christ speaks the truth in love, seasoned liberally with grace (Ephesians 4:15; Colossians 4:6). About everyone.

To the best of your ability, explain to your kids how our government works and why things can get so heated during an election year. Explain why we have the right and the responsibility to vote, but that we have to be wise about filtering the information we receive through the media. Be honest with them about mud-slinging and why elections can get so cruel. If you try to hide it from them, they will only hear about it through friends, at school or see it on TV or social media. So instead of avoiding it, help them learn to analyze it. Help them to see that we can stay above the fray and focus on the issues instead of the drama.

Instead of focusing on a particular candidate or party, talk to your kids about the issues and how your values affect the way that you vote. Instead of just giving them “the party line,” really talk through each issue with them, on their level. Ask them questions and help guide them through thinking critically for themselves what Jesus would do in each one of these situations. Be sure to look at all angles of an issue in your family discussions. For example, what does it mean to be pro-life? If we believe in the sanctity of life as a value, it is about more than just outlawing abortion. You will be surprised at how your kids and their pure perspective may help YOU filter through the sound bites and drama to see the issues more clearly.

I don’t know about you, but the last election cycle had a lot of my family and friends not even speaking to each other. I even overheard my 9-year-old son’s best friend telling him that “our families are ‘political enemies’” because his parents had told him we voted differently than they did. Even though I wasn’t supposed to be listening to that conversation, I broke right in and said, “Isn’t that great, though? That we can disagree about politics, but still love each other so much?” That immediately diffused a really awkward situation for my son. In a world that is so divided, it is more important than ever to teach our kids to show the unconditional love of Christ to everyone around them. It is even more important to model that love for them.

Value God’s Kingdom Above All

I’m thankful to live in a country where I have the right to vote, and I believe it is important for all Americans to take that responsibility seriously. I want to make as educated a decision as possible when I step up to that ballot box. However, my greatest allegiance is to the kingdom of God. I am a citizen of heaven first and an American second. The best news I can tell my kids during an election cycle is that no matter who is elected president, senator, governor, or mayor, God is still on the throne. God is in control and He raises up kings and presidents and governments and He tears them down according to His grand plan (Daniel 2:21). If the person that you thought was best or even most godly didn’t win, that doesn’t mean God is no longer in control. God used pagan kings like Pharaoh and Nebuchadnezzar and Cyrus to accomplish His will. He can use anyone.

The world seems to be so “Chicken Little” about everything when it comes to politics. No matter who you voted for, what party you’re in, what issues you’re passionate about, the sky seems to be falling all the time. When we put our hope in a political figure, political movement, or even a set of policies, we are bound to be disappointed when our candidate loses or the bill we thought was going to change the world didn’t pass. If we put our hope and our trust in the kingdom of God, we will never be disappointed.

Pray for the Whole Process Together

Yes, it is important that we vote, but the most influential and powerful thing we can do as Christians is to pray. The Bible even commands that we pray for our political leaders (1 Timothy 2:2). We can also pray for the whole election process, that people would be kind, listen to each other, and respect each other. We can pray that our family would be a light for Christ in the process and that God’s will would ultimately be done.

Talking to our kids about the election can be a character-building experience for them . . . and for us. Having to explain it to our children may actually help us understand it all even better. Try not to shy away from talking to your kids about the election. Use your family dinner discussions or even some of your family devotional time to talk openly about your family’s values and why you vote the way you do. Let your kids ask questions and help them learn to wrestle with the issues for themselves. Any time we help our kids think critically for themselves from a Christian perspective, whether that be with politics, business, economics, or any other subject, we are raising up a generation of believers who will understand how to not only live in the world for Jesus but change the world for Jesus.

Kids + Parenting ‣
5 Ways for Kids to Encourage their Grandparents