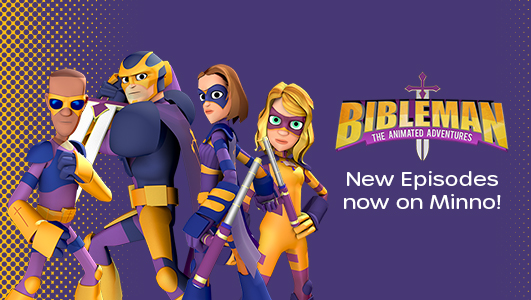 Join Bibleman and his team as they fight evil with the power of God’s word. The Bible team are dedicated to sharing the truth of Christ with all those who are willing to hear. Watch 26 episodes of this favorite animated series on Minno!

Eight new Episodes of Bibleman are Live for You to Watch Now!

Episode 1: Expelling the Empress of Unhappiness

The sneaky Empress of Unhappiness embarrasses young Hailey into dumping her Christian CD by Exaltation for a “cooler” disc by the Empress’ own band called The Dizmalz. Hailey listens and becomes depressed. Maybe the Bible team should check out The Dizmalz concert? Bible story: Paul & Barnabas in Pisidia. Key verse: John 15:11

Episode 2: A Wake-Up Call for the Slacker

Ever been in a room when somebody yawns, and soon everybody is yawning? Yes, the Slacker could just be the most “contagious” villain of all. Everybody has responsibilities—maybe it’s milking goats—and laziness always leads to trouble. Ever seen Bibleman on a farm? Bible story: Parable of the Talents. Key verses: Galatians 6:4-5

Yes, two-on-two basketball can be very competitive, but there must still be such a thing as “a friendly game,” right? Maybe not. When Cypher sees a threat alarm at East Side Park, he’s not expecting to turn into Bibleman’s enemy. How could this happen? Bible story: The Unmerciful Servant. Key verse: Matthew 9:13

Tyler is a talented athlete and looks forward to speaking for the Lord at Bibleman’s “Faith Night” event. It’s the first-ever baseball game at the new Slugger’s Field, so of course, Dr. Fear has targeted Tyler in hopes of ruining his testimony in the 7th inning stretch. Wait: is that Carlos Pena? Bible story: Road to Emmaus. Key verse: 1 Thessalonians 2:4

Episode 5: Getting Right Wrecks the Ronin of Wrong

Episode 6: Pulverizing the Plans of the Prince of Pride

With his latest invention, the Ego Boost Ray, the Prince of Pride, and his dull henchman are turning middle-school Champion Mathlete Becky Thomas into a painfully proud person. Can the Bibleteam reverse the effect by using their Containment Protocol Jericho? It’s a battle-royal! Bible story: Sit in a lower seat. Key verse: Luke 14:11

Episode 7: Bible Brigade Versus the Ambassador of Ignorance

Beware of villains bearing gifts. Somebody left a big box of brand new tablet devices at Mount Carmel Church for the Bible Brigade team. But the Ambassador of Ignorance installed a Memory Scrambler app on those devices. Will KT and Bibleman figure it out in time? Bible story: Peter & Cornelius. Key verse: Hebrews 10:16

What kind of villain bakes wickedly delicious cinnamon buns? The kind that shows up at lunchtime to entice young Ricky to eat them—and totally lose all respect for his dad and for customers at the family-run General Store. Oh, and she also lures Bibleman into a trap. She’s one bad baker. Bible story: Jesus as a boy. Key verse: Luke 2:52

The Principal of Spruce Avenue Elementary School booked some guy called The Sultan of Success as a guest speaker? What was she thinking? And what are those stickers on her lapels? Good thing the Bibleteam is always vigilant for threats. Or are they? Bible story: The Patience of Job. Key verse: Proverbs 14:29

Episode 10: Say Goodbye to the Grand Duchess of Greed, Part 1

Say Goodbye to the Grand Duchess of Greed, Part 1 (An Adventure in Generosity) - "It's MY money, and you can't tell me what to do with it!" Uh-oh, sounds like somebody is having second thoughts about paying their pledge to the Youth Group Fundraiser - and Lila is a member of the group! Is it already too late for Bibleman to save the day?!. Bible Story: Elijah & the Widow. Key Verses: Matthew 6:1-4

Episode 11: Say Goodbye to the Grand Duchess of Greed, Part 2

Say Goodbye to the Grand Duchess of Greed, Part 2 (An Adventure in Generosity) - In this exciting conclusion - will Lila learn what commitment is all about, or will the Duchess in disguise take control with the power of GreeDust? Bible story: Elijah & the Widow. Key verse: Matthew 6:1-4

Even his evil employees (aka "henchmen," "goons," or "lackeys") are afraid of The Crusher. But this most violent villain is also wickedly clever, luring Bibleman and Cypher into a deadly trap—and using school-kids as bait. Can Bibleman rescue the kids before Crusher destroys them all? Bible story: Rehoboam. Key verses: Matthew 11:28-30

Episode 13: Braving the Big Battle with The Baroness

Nobody expects an english tutor named Baroness Fitzhugh-Ferguson to win a congeniality award. But her influence on the Woodson kids is awful: does she want to turn them against each other? Bibleman knows she's a villain, but can he stop her before the family is ruined? Bible story: Jacob & Esau. Key verse: Colossians 3:13

Episode 14: Repelling the Ronin of Wrong

Talk about a knock-down-drag-out battle! Bibleman is in a fight for his life—trapped in an underground tunnel with a ruthless, twin-sword-wielding villain. Yes, our man in purple chased the bad guy away from the summer work-camp kids, but should he have followed Ronin down here? Bible story: Good Samaritan. Key verse: Galatians 6:10

Episode 15: Melting the Master of Mean

Jimmy and his older brother witness the Biblevan getting into a traffic accident. But wait—was it really an accident? Uh-oh, the Master of Mean is on a rampage to destroy Bibleman and his entire team...and he doesn't care who he hurts or what he breaks in the process. Bible story: Mephibosheth. Key verse: 2 Samuel 9:3

Episode 16: The Mayor of Maybe Doles Out Doubt

Bibleman answers a distress call from a pastor on a Caribbean island. A stranger is handing out free "Bubba Gum" to all the kids—and it's causing them to severely doubt their faith! Good thing Bibleman isn't ashamed of the gospel: he knows it is God's power for salvation to all who believe. Bible story: Peter's Pentecost Sermon. Key verse: Romans 1:16

Nobody wants to be a patient of Dr. Fear...but that doesn't stop him from planting Seeds of Fear all over Whispering Pines Christian Camp. Will the Bible Action Team figure out why all the campers—and even the counselors—are paralyzed with fear in time to foil the Doctor's nasty plot? Bible story: Jesus Calms Waves. Key verse: Philippians 4:7

Let's face it: Bibleman has a soft spot for Christian kids. And everybody knows it—including villain Luxor Spawndroth. So while it's easy to lure the Bibleteam into rescuing kids in danger, the hard part for bad guys begins when the purple crew shows up. Will Bibleman be able to spot Luxor's trap? Bible story: Adam & Eve. Key verse: Ephesians 6:2

Episode 19: Ambushed by the Ambassador of Ignorance

Yes, kids often get involved in foolishness. And pranks can be harmless fun. But not the ones pulled by some kids from Life Church. They unwisely posted videos of themselves pranking and elderly lady at the mall. Bibleman must find the mysterious "Iggy" person behind this mischief. Bible story: Wise Man/Foolish Man Parable. Key verse: Luke 2:40

Episode 20: Stopping the Sultan of Selfishness

Young Tariq is from a rich family, although his parents don't just give him whatever he wants. Uh-oh—the family's live-in butler is secretly buying Tariq expensive gadgets and gizmos. But why? Bibleman knows why: The servant is really a wicked villain who targets the children of wealthy families. Bible story: Prodigal Son. Key verse: Luke 12:15

Episode 21: Lighting Up the Shadow of Doubt

Cypher and Bibleman are going to jail!? Oh, they're visiting some young men at a juvenile detention center. And the little brother of one of the inmates wants to meet Bibleman, so Pastor Lewis is taking Logan there on Bible study day. Wait—who is that shadowy character in the waiting room? Bible story: Jesus & Peter Walk on Water. Key verse: John 8:12

Episode 22: Fracturing the Falsehoods of the Fibbler

The new kid at school isn't fitting in. But when some students start mocking her, she pours out a blizzard of words that totally intimidates everybody around her. Wait, why is the Bible team getting an alarm just because a young girl stands up to some bullies? Is there more here than meets the eye? Bible story: Ananias and Sapphira. Key verse: John 3:21

Episode 23: Wiping Out the Whiner Brothers

Junior and Biggie Whiner complain about everything. Except money. They just LOVE money and have hatched a plan to get rich by uncovering a secret treasure: the location of the Bible team headquarters. Oh no—they're using a newly-adopted boy from Africa to lead them there. Bible story: Jesus Heals Ten Lepers. Key verse: 1 Thessalonians 5:18

Luxor has finally done it: not only has he created an addicting online video game, and not only has he spoofed the server's location, and not only has he lured the entire Bibleteam into a trap, he's also managed to—wait a sec, is that pizza really free? Wow, this is irresistibly yummy! Bible story: Satan tempts Jesus. Key verses: Galatians 5:22-23

Luxor has finally done it: not only has he created an addicting online video game, and not only has he spoofed the server's location, and not only has he lured the entire Bibleteam into a trap, he's also managed to—wait a sec, is that pizza really free? Wow, this is irresistibly yummy! Bible story: Satan tempts Jesus. Key verses: Galatians 5:22-23

Kettle-corn is the best part of so many summertime fairs and festivals, like the one at Hope Fellowship Church. The Fibbler uses his invisibility to damage the kids selling the Kettle-corn: and the whole thing is all happening right under Bibleman's nose! Bible story: Achan at Jericho. Key verse: Proverbs 10:9

Bible + Faith ‣ Kids + Parenting ‣
What Does the Bible Say About How to Treat Others?