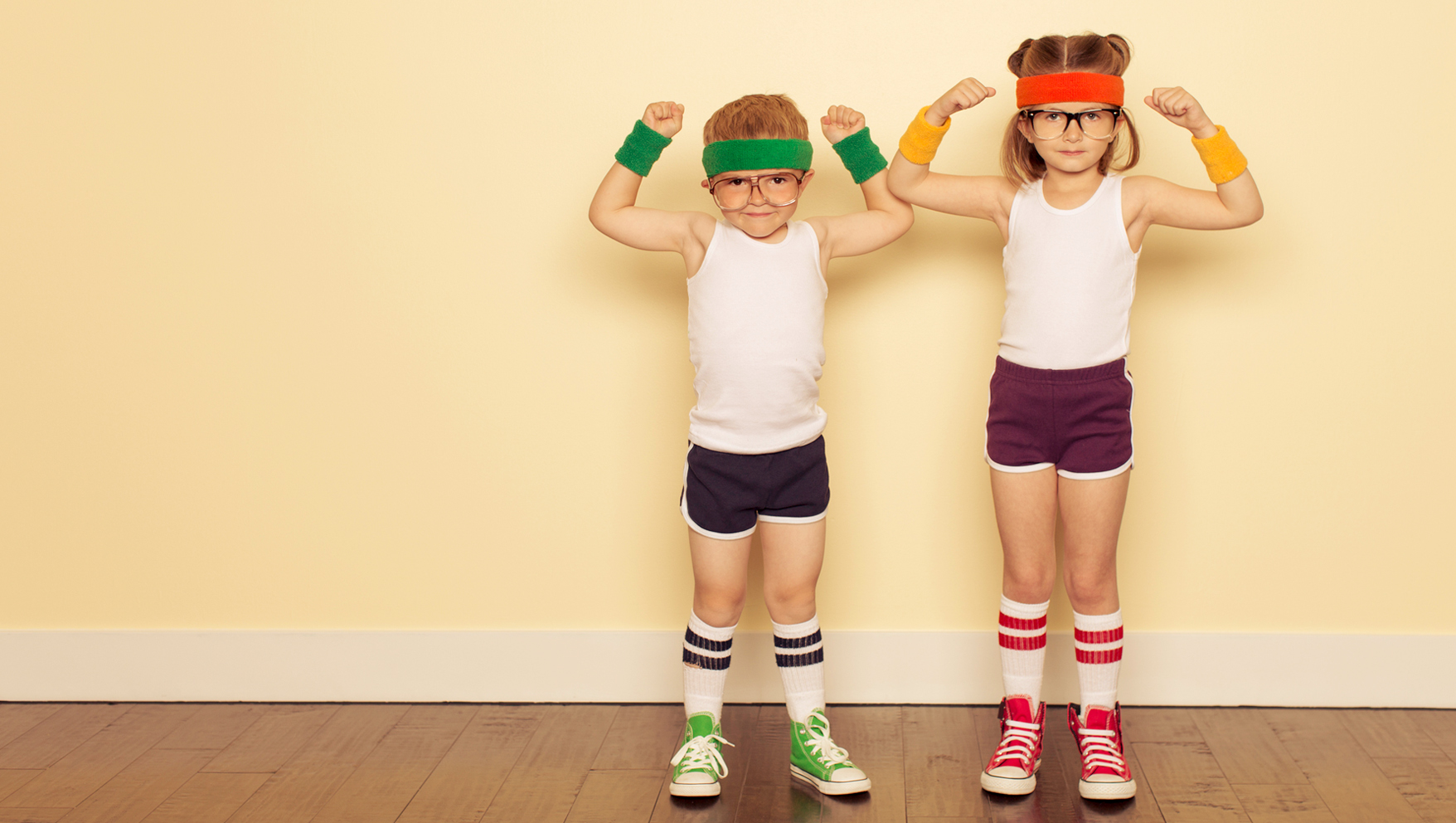 "Mommy, I'm strong and courageous!" he shouts with fists clenched, muscles flexed and feet ready for battle. We've taught our two year old this declaration, which represents the name we so purposefully gave him. Our Joshua will be a man of strength if we have anything to do with it. Our boy will be courageous because, with God's help, we'll show him the way.

I can do all things though him who strengthens me.

Teaching kids about strength seems like a no brainer. As Christians we believe our strength comes from God and as we teach this truth to our children, we expect them to accept it and apply it to their lives. But when push comes to shove, it can be hard to access the strength available to us. It's often easier to retreat in fear than stand up and face a battle head on.

The most important way we can help our kids have the courage to stand strong is to be an example of strength for them. Children need to see us facing our fears with confidence and peace. They need to watch us walk through problems and hard situations with the graceful strength that only comes from God.

And as we ourselves become an example to them we can also point them to Biblical examples of strength to further develop their confidence in themselves and in God.

The Story of Gideon

And the angel of the Lord appeared to him and said to him, "The Lord is with you, O mighty man of valor." And Gideon said to him, "Please, sir, if the Lord is with us, why then has all this happened to us? And where are all his wonderful deeds that our fathers recounted to us, saying, 'Did not the Lord bring us up from Egypt?' But now the Lord has forsaken us and given us into the hand of Midian." And the Lord turned to him and said, "Go in this might of yours and save Israel from the hand of Midian; do not I send you?" And he said to him, "Please, Lord, how can I save Israel? Behold, my clan is the weakest in Manasseh, and I am the least in my father's house." And the Lord said to him, "But I will be with you, and you shall strike the Midianites as one man". . .But the Lord said to him, "Peace be to you. Do not fear; you shall not die.

Because God is with us and will help us, we can have peace and not fear. Gideon knew he did not have the strength within himself to defeat the Midianites. But God assured Gideon that he would be protected and would win the battle. When our strength comes from God, we can do things we never thought possible. This story is a wonderful example for kids as they are facing hard situations. A difficult test? A broken friendship? A tough try out? Assure your children that their strength to endure and to accomplish the task comes from a God who loves them and is always with them.

Finally, be strong in the Lord and in the strength of his might. - Ephesians 6:10

Kidmo Zoom: What Are the Attributes of God?

The Story of Shadrach, Meshach and Abednago

When faced with hard decisions, especially when needing to stand up for what we believe, God gives us the strength to make the right choice. Shadrach, Meshach and Abednego knew what the king was asking was wrong. And they did not hesitate to stand up for God. They believed he would protect them and give them the strength to withstand the pressure of the king. In the end, Shadrach, Meshach and Abednego were safe and God received the glory. Share with your children that when they face decisions that seem hard or need to stand up for something they believe in, God will give them the strength they need to choose what is most pleasing to him.

God is our refuge and our strength, a very present help in trouble. Psalm 46:1

What's in the Bible? Messages of the Prophets

Friends and Heroes: The One That Got Away

The Story of Esther

All the king's servants and the people of the king's provinces know that if any man or woman goes to the king inside the inner court without being called, there is but one law--to be put to death, except the one to whom the king holds out the golden scepter so that he may live. But as for me, I have not been called to come in to the king these thirty days." And they told Mordecai what Esther had said. Then Mordecai told them to reply to Esther, "Do not think to yourself that in the king's palace you will escape any more than all the other Jews. For if you keep silent at this time, relief and deliverance will rise for the Jews from another place, but you and your father's house will perish. And who knows whether you have not come to the kingdom for such a time as this?" Then Esther told them to reply to Mordecai, "Go, gather all the Jews to be found in Susa, and hold a fast on my behalf, and do not eat or drink for three days, night or day. I and my young women will also fast as you do. Then I will go to the king, though it is against the law, and if I perish, I perish.

Sometimes God gives us special opportunities and extra strength to make a difference in the lives of others. Esther's people were in trouble. Although she was the king's wife, he didn't know she was Jewish. The king had been convinced to get rid of all Jewish people, and at first, Esther was afraid to do anything about it. Then her cousin, Mordecai reminded Esther that she was given her royal position "for such a time as this." He reminded her that God would give her the strength and courage to use her position to help their people. Sometimes God gives us opportunities so we can make a difference. Assure your children that if God puts them in a position to do something good, he will give them the strength and the courage to complete the task.

The Lord is my strength and my song; he has become my salvation. Psalm 118:14

Sing Through the Bible: Esther Sing-Along

Bugtime Adventures: Not to Bee

Friends and Heroes: Doing Our Part