As we celebrate dads this Father’s Day, we wanted to share a story from a new dad who is experiencing his first Father’s Day. His story helps us remember that God is faithful, even in brokenness.

Two years ago, my wife and I officially started the process to adopt a child from Uganda. We started the paperwork, raised thousands of dollars for adoption fees, and were matched with a smiling little 3-year old boy. It’s a boy!

We got to that point by saying, “Yes,” to God. We had a passion to serve those in need. We had a love for the nation of Uganda. We knew the words of James 1:27: “Religion that God our Father accepts as pure and faultless is this: to look after orphans and widows in their distress.” We knew the stories of the faithful saints in the Bible who lived by faith and were honored in Hebrews 11. We were ready to start a family, and we felt called to grow our family through adoption.

In March of 2014, my wife traveled to Uganda to meet the boy who would become our son. We had only seen pictures of him for several months, and now was her chance to bond with him before I arrived to start the legal process. After spending a week with him, due to events beyond our control, my wife was informed by our attorney that we could not adopt him. Just like that, it was over, and my wife was on a plane back home the next day.

For the next several months, we wrestled with so many emotions – disappointment, resentment, apathy, disbelief, impatience, fear, anger, anger, and anger. Should we give up? Maybe it wasn’t meant to be? Why did this happen? How was this God’s plan? We were near the breaking point to call it quits, but we chose to keep going. There was a child in Uganda who needed a family.

On Father’s Day last year, I sat in church holding back tears as the preacher asked all of the dads to stand and be recognized. I should have been one of those standing, because it should have been my first Father’s Day. I cried for my wife, because she fell in love with this little guy and had to drive away from an orphanage and leave him standing at the gates. I cried for that little boy, because we had no idea how he was doing or what would happen to him.

I had never felt brokenness like I felt that day.

The next day, we got an email from our adoption agency with pictures of a one-year old boy. There were pictures attached along with the report describing his story. Once again, we said, “Yes,” and we started the process again. We signed more papers, got everything in order, and waited for 4 more months.

In November, we got on a plane and flew east. Even when we landed in Uganda, we still had doubts. Surely, the same thing won’t happen twice, right? We went out to the orphanage, met the director, and someone brought us our son. You can’t prepare for that moment. No one, including myself, can accurately describe what it is like to sit in a crowded 8 ft. x 8 ft. office with 5 total strangers and have someone put your child in your arms: awkward, weird, and totally awesome.

I was only able to stay in Uganda for 2 weeks, but my wife stayed there for the duration of the process – two and a half months. Finally, in January, my wife and our son, Wyatt, came home. 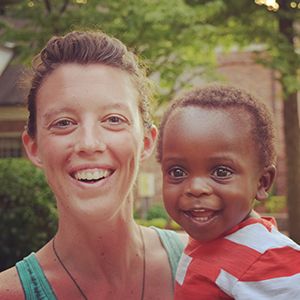 It has been a wild transition to go from having no children to chasing down a two-year old. (Parents of toddlers unite, am I right?) It’s been wild, yes, and it’s also been a really awesome transition into fatherhood. There’s something really special about hearing the word, “Daddy!” for the first time. Teaching your son how to throw a football and helping him shoot baskets are all kinds of fun. Having your son say, “Love you!” is enough to make a grown man melt. Watching the biggest brown eyes light up and hearing squeals of laughter when you come home at night stirs up all the mushy feelings that guys aren’t supposed to talk about. Being a dad is really fun.

I’m finding that being a dad is also full of holy moments where I can see, in the flesh, that God is doing a new work in my son. There are moments where I am reminded God heals and restores hearts. He is continuously working in my son, and I am bearing witness to that. I see my flaws and my imperfections, and am reminded yet again that His grace is sufficient. As a dad, I am reminded that the fierce protection and immense amount of love I feel for my son doesn’t even compare to the protection and love Jesus offers.

A native of Houston, TX, Dustin moved to Tennessee in 2009. He is an avid runner but says it is only because he likes baking desserts a little too much. He enjoys traveling and has been to 5 of the 7 continents. Dustin, his wife Courtney and son Wyatt currently make their home in Franklin, TN. Dustin and Courtney blog about their lives and adoption journey at https://dustinkoctar.wordpress.com.